Directing and Producing goes deeper than stitching images together. It’s about connecting. Connecting people. Connecting ideas. Connecting emotions. It moves people beyond themselves into a world they’ve never seen before.

Working with businesses in Saratoga Springs and Ballston Spa to connect with customers through video allows me to make a difference in my community. Working in short films, special projects, and simply helping people become the best version of themselves, gives me a unique opportunity to find ways to change my world.

I’ve had the pleasure of knowing Ed Maillet for some time. He’s sharp, he’s brilliant, and a technical mastermind. His job is to scope out systems and he can talk deeply on just about any technology that exists.

Ed had one project that he was dreading. It was freaking him out. Yet it was something that would become one of the most exciting and engaging projects he had ever worked on.

He was involved in an Innovation Challenge for his Fortune 300 company. This challenge allowed anyone within the company to submit an idea. One of those submitted ideas would be chosen to become a fully-funded project. 90 ideas were submitted, and over 7,000 votes were cast. Ed had a strong belief that paid sabbaticals could improve company culture and employee retention, as well as foster some innovative thinking from different experiences. His idea was one of only 5 finalists in the competition.

That would normally be great news, but it only made things more terrifying. Being in the top 5 meant he would have to give a presentation in the large atrium in front of hundreds of people and live over video conference. A little bit of panic set in. “I thought ‘oh, this isn’t going to be a web presentation’,” Ed recalls. “’It’s going to be live on the big stage.’ I didn’t think it was going to be that way when I first started; I wasn’t planning on that anyway. I was terrified.” 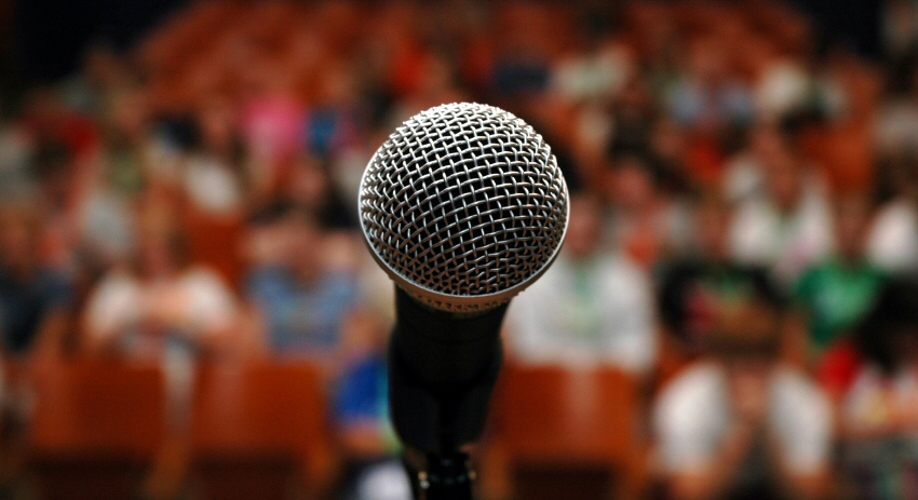 He was right to be concerned. He didn’t know how he would present the information in a compelling way. His plan was typical, but he was not heading in a good direction. In retrospect he knew it would not have captured the attention of the audience. “It would have been dreadful. It would have been the classic bulleted, boring numbers. There would have been no story, almost no imagery.”

But somewhere between creating the idea and presenting it, Ed attended one of my courses on building engaging and powerful presentations. During the session, Ed had what he calls an “aha moment”. “When I went to the first session, the dissection slide that took one slide and broke it into many, showing that more slides is okay, that was the first ‘aha’. Then the structure of the ‘what is, what could be’ followed by the slide examples that were nothing but pictures – it was like ‘wow!’ And then I looked at all the videos in the reference section.” And it wasn’t just my program, but also a storytelling session with storytelling consultant Geoffrey Berwind, highlighting the power of stories in the workplace.

That’s when things changed. That’s when he went from expecting a dreadful presentation to presenting something extremely powerful and engaging. The audience listened intently as he led them deftly from point to point and they reacted positively to the content. Ed felt he provided an enjoyable experience. “I thought I nailed it… or close to nailing it. I didn’t fall down the stairs. I didn’t break a leg. I didn’t freeze up. I got the laugh on the slides I wanted to get the laugh on. I saw the faces of the judges and they certainly appeared engaged. And then the feedback I got afterward…” The feedback was very strong. It was obvious that he had, in fact, nailed it.

Even though Ed’s project was not chosen, he received much more than he expected, “The whole thing was probably one of the most exciting and enjoyable work assignments I’ve ever had. It was a blast! I can’t wait to do something like this again.” Sometimes the most amazing outcomes are those that we don’t expect.

For as long as I can remember, I have always been driven in two directions: to help people and to find the maximum that people can achieve. My dad was a pastor, and I grew up in church, being a youth leader, organizing events, and working hard to motivate and inspire others. I was always intrigued by the future, seeing all the potential that was out there.

My life’s purpose is to see that future in others, helping them to maximize who they are. I have spent many years in research, education, discovery, and hands-on leadership to find the best way to help people become all they can be. I have counseled, led, and enlightened people to bring them to their best selves. My mission is to inspire people to become the most amazing version of themselves.

To that end, I have traveled to more than 45 states. I have spoken in various Fortune 500 campuses, churches, universities, and clubs. I have helped people broaden their careers, expand their minds, and improve themselves.

Want to share something exciting, but don’t know how? Want to learn more about success, health, or engaging an audience? Looking for someone to speak to your group in a way they won’t forget? David Bishop is an award-winning, international speaker who’s spoken to several Fortune 500 campuses, universities, clubs, and churches. Find out why thousands have enjoyed hearing him speak. https://davidsbishop.com

How can faith supercharge your life? In this first video in a three-part series, award-winning, international speaker David Bishop shares 3 stories that show the value of faith. https://davidsbishop.com

How can faith improve our lives? In this second video in a three-part series, award-winning, international speaker David Bishop highlights 5 steps for improving your life using faith. https://davidsbishop.com

Want to put your faith into high gear? In this final video in a three-part series, award-winning, international speaker David Bishop shares 4 steps to activate your faith. https://davidsbishop.com

What People Have to Say

Anyone who has to give presentations or public speaking needs to take this course.

This workshop hands down gave me the best presentation advice I have received in my time at Georgia Tech!

David has inspired change throughout IT and beyond with his message on building engaging presentations.

…these presentations are so wonderful – so much useful information delivered in a fast-paced, fun and energetic way.

’Be Remarkable’ was an amazing program that opened my eyes to the world of presenting. I would recommend this program to anyone. It was a valuable experience to me!

David talked to the students about giving effective presentations, and they were wowed by it… his ‘Be Remarkable’ talk is now shorthand inside the office for how to make public speaking more engaging.


A valuable course that provided tips that will stick with me through the course of my professional career. I would recommend this course to anyone…

Ready to Find your Amazing?